I went to school at St. Andrews from 1954-1959, and remember being terrified (with no particular reason) of the headmaster, Mr. Ramshaw, of whom I know nothing.   My father was aware of this, and on school mornings, when I was dawdling and reluctant, he would shout, "fifteen minutes to Ramshaw-time" as a way of reminding me that if I was late, I might end up in the headmaster's office.  I remember an assembly room, where we met each  morning to say prayers. It was, after all, a Methodist school, and was reasonably strict, with corporal punishment doled out infrequently to the worst offenders. My favourite teacher was Miss M. Berry, who lived in Farnworth. When I left the school, she generously gave me a copy of The Enchanted Capital of Scotland and other books as a parting gift. They meant a lot, and I still have them. 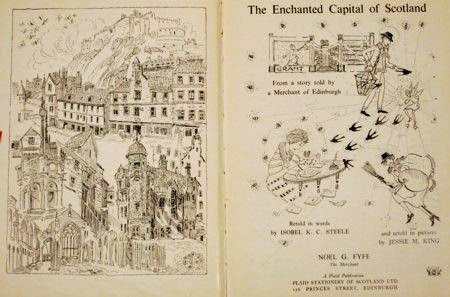 My desk was ink-stained, and everyone sat in rows facing forward  There was a huge circular metal pipe running along the wall, just above the skirting board, which provided some modicum of heating. Although my classroom was co-ed, the school had separate playgrounds for boys and girls,  There was also a grass playing field behind the school. Balls, rubber quoits, skipping ropes and wooden hoops were provided at playtime. I remember a cloak room, replete with clothes hooks, on which we hung our coats and scarves. Over each peg was a picture, so we could more easily remember the peg on which we had left our clothing.

When I was eight or nine years old, we were given a series of history lessons that began with prehistoric Swiss Lake Dwellers and ended with the Saxon and Norman invasions of Britain. It instilled in me a life-long passion for things ancient, which ultimately led to a D.Phil in European Prehistory at the University of Oxford. I also recall being taught how to weave on a small cardboard loom and how to knit.

It was a time when it was safe to walk to school unaccompanied by an adult. I lived on Ordsall Avenue, which meant a walk down Bridgewater Street to Manchester Road on which the school was located. On the way, I would pass the Blair Sunday School on the left, which I attended regularly, mostly to collect the stamps of biblical scenes, which were handed out weekly, for inclusion in my booklet. It was a Victorian brick building to which we walked each school day for our dinner, generally potato hash, with rice pudding for dessert.  At school, we were give a small glass bottle of milk in the mornings, but not until we had answered our multiplication-tables question correctly!

I remember with fondness making chains out of coloured paper to decorate our classroom at Christmas, and singing Christmas carols and eating whatever fare the local mothers kindly brought to our Christmas party. Remember, this was post-war austerity Britain, when receiving treats still meant something.

It appears that by the time the school was due for demolition it was known as St. Andrew's West, but I only knew it as Walkden Methodist School. It was built around 1877, closed in 1981, and, sadly, eventually pulled down. 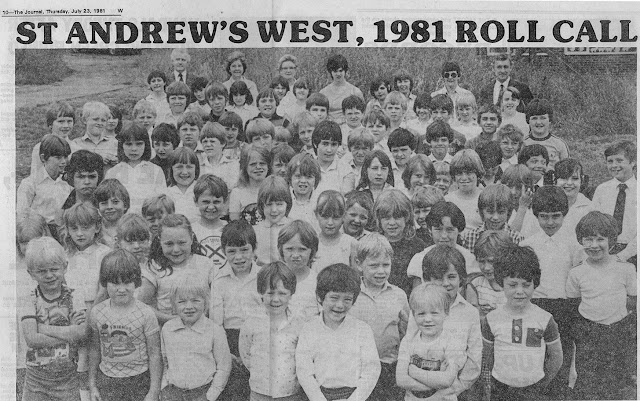 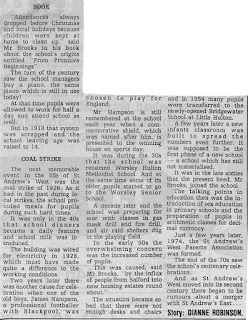 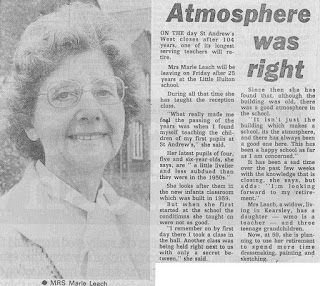 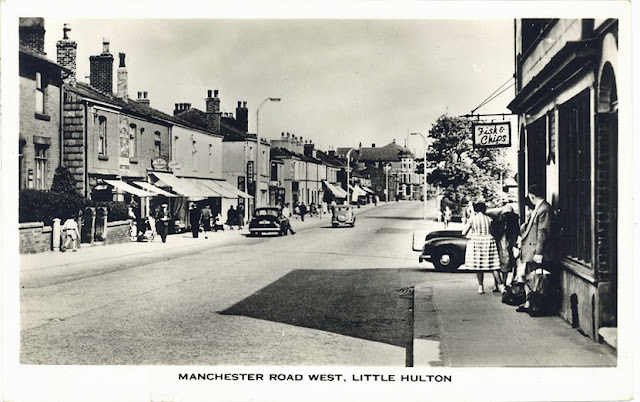 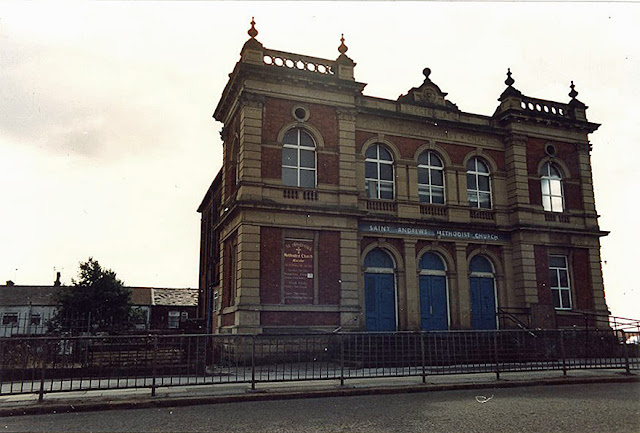