Construction of the Salford Infantry Barracks on Regent Road began on 1 November 1819.  This date is significant, occurring only weeks after the Peterloo Massacre, which took place on 16 August 1819. To place the disposition of this military installation in its wider historical context, we need to consider events before and after this bloody confrontation.


click on images to enlarge
The Age of Enlightenment left a legacy of ideas promoting personal freedom, equality, societal reform and democracy. These ideals resulted in the American Revolution (1776) and the French Revolution (1789).  Such politically radical events were threatening to the British ruling class. who responded with various repressive measures designed to arrest the spread of political reform.  Their apprehension was heightened by incidents like the Despard Plot, the March of the Blanketeers, and various other riots and unrest.

The period following the Napoleonic Wars was one of severe economic distress. The cost of the conflict with France left Britain with a national debt of £848 million. Many suffered high taxes, negligible political representation, stagnant wages (Luddism), skyrocketing food prices (exacerbated by the Corn Laws) and poor living conditions, especially for the burgeoning working class. In protest, tens of thousands of people from Manchester, and its surrounding areas, assembled peaceably at St. Peter's Field. The government was alarmed, and responsed with force. Mounted militia, [1] with sabres drawn, slashed and trampled the unarmed crowd, littering the field with hundreds of wounded and dead bodies.  The massacre was followed by more repressive laws and arrests.  On the day after the Peterloo Massacre the following poster was issued. 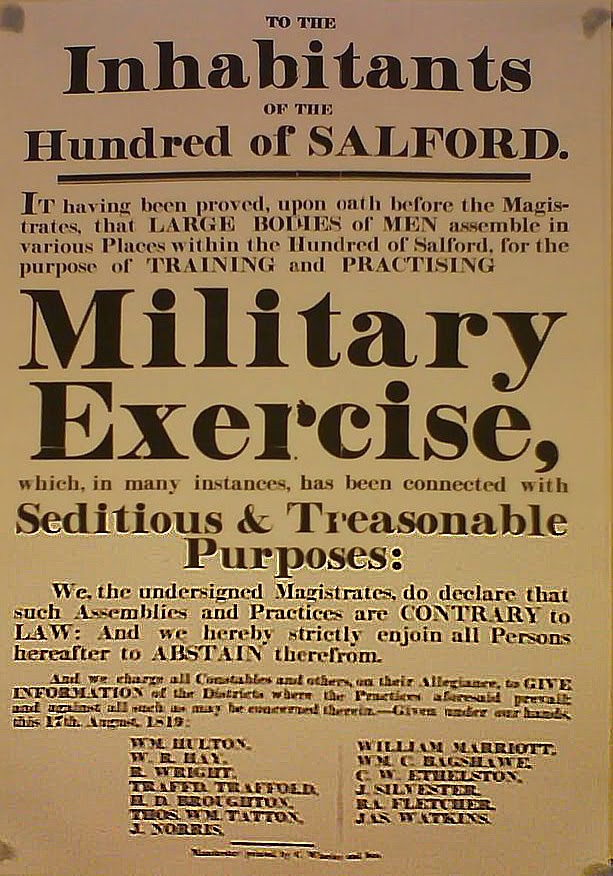 When we consider the events above, it seems reasonable to conclude that the initial purpose of building the Salford Infantry Barracks was that its garrison could be used to quell any potential insurrection that might arise in the district.  Even as late as 1881, a company of the 8th Infantry, stationed at the Salford Barracks, was used to suppress a mob of angry miners at Howe Bridge, Atherton.

The following shows the regiments, or elements of regiments, that were stationed at the Salford Infantry Barracks. Unless otherwise noted, much of the information has been gleaned from the church records of nearby St. Barthomew, Salford (founded in 1841 on Oldfield Rd.).  The dates reflect those given in the records for baptisms and marriages, and do not represent the duration of unit deployment at the barracks. However, they do provide a useful framework.  After the Childer's Reforms of 1881, some soldiers continued to use their old regimental designations.


A new 96th was raised five years later on 6 February 1824 at Salford Barracks, Manchester. It was allowed to carry the battle honours awarded its predecessor - Peninsular, Egypt and the Sphinx.


A detachment [of the 2nd Battalion] of the 60th Rifle Corps, stationed at Salford Barracks, was involved in an accident on the Broughton Suspension Bridge crossing the River Irwell.

"On Tuesday morning last, a duel was fought in a field adjoining Regent Road, and opposite the end of Cross Lane; but the facts connected with it have been so carefully concealed by the parties, that we are quite unable to give any exact statement of the particulars. According to the most probable account we have heard, the belligerents were two officers of the 18th Infantry, a detachment of which regiment is stationed in the Regent Road Barracks. It is said that the cause of quarrel was some misunderstanding at the mess, in consequence of which a challenge was sent, and the parties met at day-light. On the first fire, one of the parties, said to be a Lieutenant Strachan, fell, having been shot through both thighs, just above the knee. He was immediately removed to the Duke of York public house, in Regent Road [see above plan], where he now lies. It has been stated, we believe erroneously, that one of his legs had been amputated ; but such is the secrecy observed, that it is extremely difficult to ascertain that or any other fact connected with the affair.—Manchester Guardian. [Here is a full, true, and particular account of an affair, including names, places, dates ; and the only fact known to the narrator, connected or not connected with it, is that the 18th Infantry have at present a detachment in the Regent Road Barracks. ] " Spectator 6 Oct 1832

"August 1833: Headquarters ordererd to Salford Barracks, Manchester, where the detachments rejoined." Campaigns and History of the Royal Irish Regiment from 1684 to 1902

William Wilmore, stationed at the Salford Barracks, was court martialed on 18 June 1832 for desertion, and transported to Australia 24 August 1833.


Edward Wright was court martialled at Salford Barracks on 10 January 1834, and transported to Australia. He had been with the 85th for 17 years. [2]

[elements of the 15th Regiment housed at the Tib St. Barracks, Manchester, were placed under guard at the Salford Barracks]. See London Magnet 5 June 1843


(encamped a few weeks in April)

Sir H.G.W. Smith distributed medals, at the Regent Road Barracks, Salford, June 4th, to those officers and men of the 51st Regiment who fought in the Burmese War. Colours were presented to this regiment by Lady Wiltshire, June 6. Annals of Manchester

"Thomas Hargreaves, colour-sargeant of the 84th Regiment, a man of good character, shot himself through the head with his rifle, in the Regent Road Barracks, Manchester." Spectator 22 September 1860


The bombing of the Salford Barracks on 14 January 1881 was the opening shot of the Irish Republican Brotherhood's campaign against the Crown that lasted until 1885. [5] The British newspapers of the day referred to the Irish nationalists as Fenians, which included a cadre of Irish-Americans. Their guerilla offensive is known to historians as the Fenian Dynamite Campaign.

"The following removal of troops [of] the northern district take place below —2nd battalion of the South Staffordshire Regiment stationed at Salford Barracks, Manchester, will proceed to Liverpool..."
March 16, 1886 - Manchester Courier and Lancashire General Advertiser

In the Parliamentary Debates (1896), the closure of the Hulme Cavalry and Salford Barracks was being discussed. Regarding the Salford Infantry Barracks, it was said that:

"The barracks at Salford have such unsatisfactory drainage that they cannot be occupied without very considerable reconstruction."

. It appears that the sewage system was so bad that the barracks were vacated and the garrison moved to Hulme Barracks on 30 April 1896.  Apparently, only a 4-inch drainage pipe was laid in 1850 to service the barracks.  The hospital facilities were also found to be substandard.


"... the New Barracks Estate, Salford which was built between 1900-1904 on the site of a former early C19 infantry barracks. The estate was Salford Corporation's first housing scheme, and not only provided housing, but also community buildings, including Salford Girls' Institute (destroyed during WWII), Salford Lads' Club (1903, Grade II) and the Church of St Ignatius."

The She Battery was a dangerous and poverty-stricken area opposite the Salford Infantry Barracks.


"The She Battery," I remarked, "if I mistake not, is opposite the Regent-road Barracks ?" "Yes," answered our guide. "It is the worst quarter in Salford. Nearly all the houses we shall see there are sub-letting houses." "Tell me what is meant by a sub-letting lodging house ?" "It is soon done," continued our guide. "A person, man or woman, rents a house with five or seven rooms, pays the landlord, say, a weekly sum of 6s. or 7s. a week, he or she—the tenant you know—sub-lets the rooms he does not occupy to casual lodgers for 2s. 6d., 2s., or 1s. 6d. a week, according to size and storey." ...  The Barracks were reached, and leaving them on our left, as we crossed over, we found ourselves in Providence-street, one of the many which form the block known as the She Battery." Source: The Tablet 29th September 1888

The 'She Battery' Mob, a gang of scuttlers, flourished around 1870.